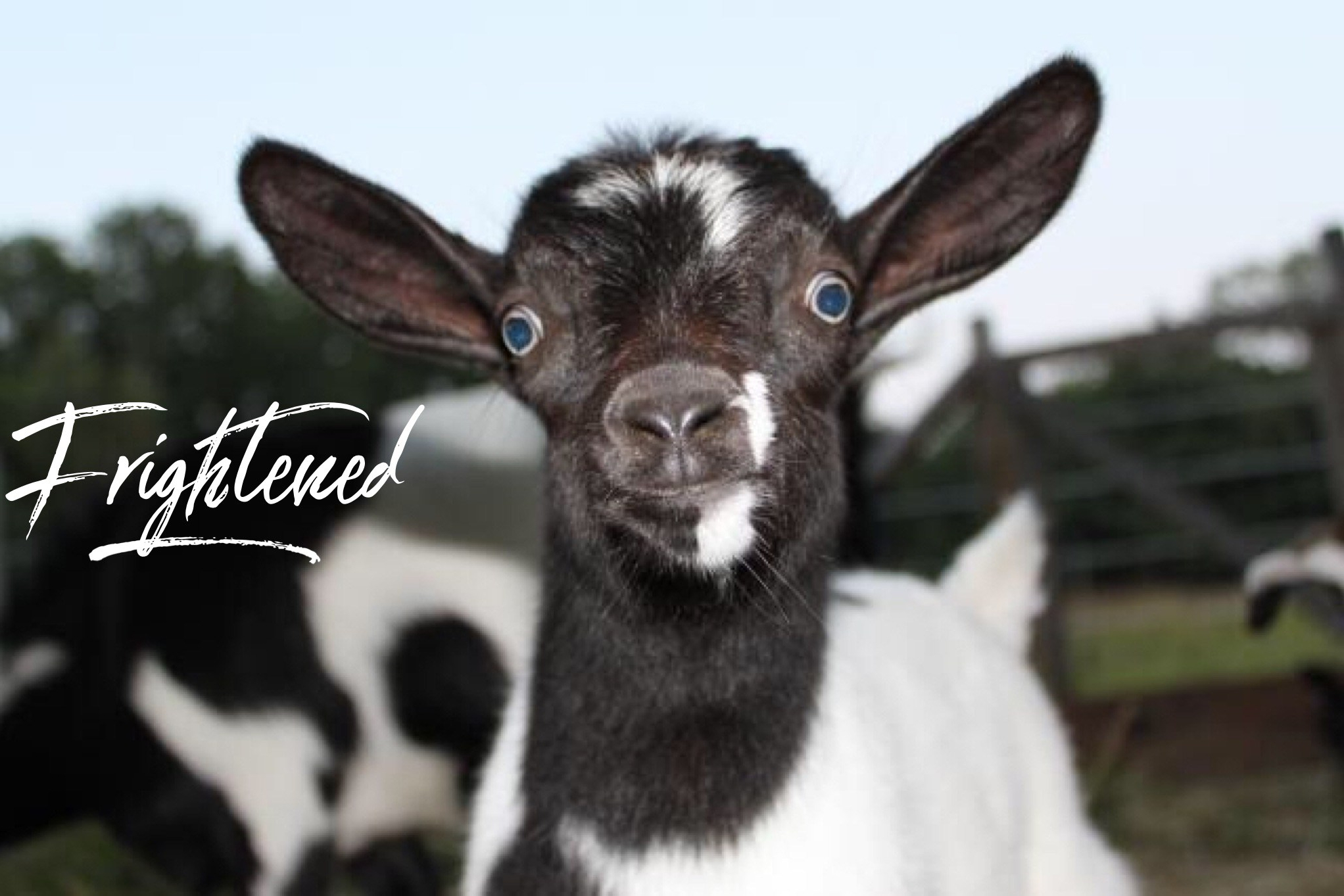 Have you ever seen a fainting goat? Here is a video.

History tells us a traveling farmer named John Tinsley brought 4 of these goats with him to central Tennessee from Nova Scotia in the 1880’s. He called them “stiff” goats.

Their popularity sky rocketed and new names began to emerge: Tennessee Fainting, Tennessee Meat, Texas Wooden Leg, Nervous Goat and Scare Goat. Farmers loved these animals because they were easy to fence in and they tasted good (not that I know that first hand).

Fainting Goats do not actually faint. They have Myotonia Congenita, a condition in which the muscle cells experience a prolonged contraction when the goat is startled. In other words, when they get excited, stressed, or scared their muscles stiffen and freeze. They fall over completely awake.  There is no evidence this condition causes pain. I guess that makes me feel better when I watch videos and laugh. What happens to them happens too many of us when we get spiritually startled.

Paul explains this spiritual condition in the book of Philippians. The people there were facing persecution from their neighbors and arguments from within their own gathering. Knowing these challenges were rubbing up against their faith in Christ Paul wrote…

Whatever happens, conduct yourselves in a manner worthy of the gospel of Christ. Then,…I will know that you stand firm in the one Spirit, striving together as one for the faith of the gospel without being frightened in any way by those who oppose you.

Paul speaks of standing firm and striving together without being frightened. This is the only time in the New Testament this word is used. It is the image of a horse frozen stiff on the battlefield due to the noises and images of war. When a military horse was too frightened to act in battle, it was liability to the rider and an opportunity for the enemy. We may smile at fainting goats, but a soldier on a frozen horse in the midst of battle was no laughing matter.

The Philippians were in a spiritual war. They had enemies trying to harm them…silence them…shut them down. They had conflicts within their group that threatened friendships and stability. It was a startling time. It was a stressful situation. Life was difficult. It was frightening, but they could not freeze up. They could not faint.

Followers of Christ in today’s world find themselves in awkward situations. We are living in a world that perceives faith in Christ to be either irrelevant or evil. In the U.S., we have not yet faced physical harm for following Christ, but emotional harm and contentious relationships are very possible. Unfortunately, the uneasy, tense emotions that come from doing the right thing or saying the right thing is all that is needed for some of us to “freeze.” Some of us  “faint” at just the thought of talking about Christ because we fear being misunderstood or judgmental or politically incorrect.

Fainting followers of Christ are not cute like the Fainting Goat. No, unfortunately they are a liability to themselves and other believers. They give an opportunity for the enemy to advance. I know that is harsh, but it is exactly the image Paul was painting. In the face of hardship, strained relationships, and uncomfortable conversations, we are to stand firm and strive together without being frightened.

The courage to not be frightened happens when we stand firm and strive together. To understand how these three things work together let me share a legend from World War II.

In April of 1940, German tanks rumbled into Denmark. To intimidate and oppress, the Germans would require every Jew in an occupied country to wear the yellow Star of David. Any Jew who failed to comply would be put to death. The Star of David, a proud symbol of Jewish faith and culture, was being used to mark Jews as second rate members of society—to rob them of their possessions, their dignity and their lives.

Denmark and its people were in no position to do battle against the powerful German army. But their leader, King Christian the Tenth, made a bold move to protect Danish Jews—a move that put his own life at risk. The Danish king called for all Danish citizens to wear the Star of David. He called for every Danish household to stand firm in their conviction that all human life was important and to strive together to protect their Jewish neighbors.

What would you have done? Would you have pinned a Star of David on your child and sent them to school? Would you pin one to your own chest as you walked out the door to go to work? Would you be the only family to do this? What would others be doing? If you did it, would you and your family suffer with the Jews?

The story goes that what the Germans saw after King Christian made his plea was nothing short of a miracle. Stars of David were everywhere on every person. Jews were weeping tears of joy in the streets as they saw their neighbors willing to suffer with them and not be frightened.

The story is a legend. It never happened.

The legend grew from remarks that King Christian made to German officials, on the radio to his countrymen and in his personal journal. In all three places he stated that if the Germans called on Danish Jews to wear the star, he would wear it and ask all Danes to join him. Because of his opposition to the enemy and their tactics, and because of his willingness to stand and suffer with the Jews, the Nazi’s full plan of persecution against the Jews was never carried out in Denmark. Danish Jews were never asked to wear the Star of David.

Stand firm, strive together and do not be frightened. These are the keys to pushing back against the evils that can frighten us. They are the non-violent actions required to resist injustice, cruelty, hatred and ignorance. God uses these actions in us and through us to show love to people who have lost their moral compass or been hardened by the disappointments and tragedies of life.